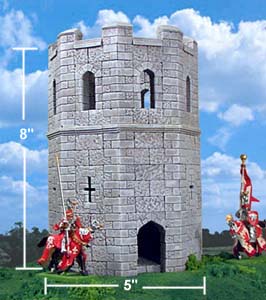 You can download the plans shown here from the Building Plans page.
Start by cutting out the floorplan of the tower and gluing it to a piece of cereal box.
Next trim away the outside and trim off the black outline also.
Glue the floor tiles down to the center of the plan. 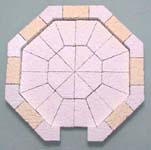 Place a row of blocks around the outside.
Glue them together but don't glue them down to the plan or the floor tiles! You'll want to remove the building from the floor later on to paint the thing.
You'll also notice that some of the blocks are yellow.
These represent basic blocks (1/2" x 1/2" x 1") that you can find on molds #40, 50, 51 or 100.

Here are the next two rows of blocks on the tower.
Be sure to keep the rows straight.
Use a flat piece of cardboard to push up against the sides of the tower to straighten it. 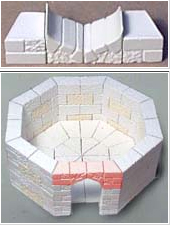 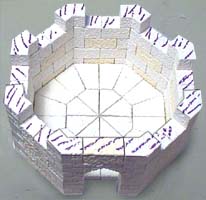 For the next row, just glue the elbow blocks down (plus the one regular block in the front).
We want to make a removable layer at this point. Mark the tops of this layer (I used a black marker) because you don't want to glue it to the layer above.
It will serve as a reminder not to put glue there.
Later you will be able to lift off that section.
This will make it easier to paint the inside and also place miniatures in the building when finished. 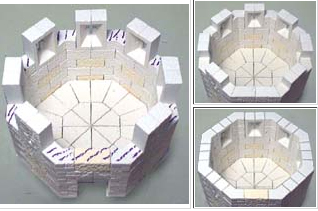 Here are the next two rows glued on top.
The second floor will go on top of this last layer.
Once again, mark this layer so that you don't glue the second floor onto it.

For the second floor, start by gluing a set of floor tiles down to a piece of cereal box.
If you want to be sure it's straight, print out a copy of the floorplan from the Building Plans page and glue it down first.
When dry, cut the excess cereal box off with a pair of scissors.
Be sure to cut really close so there's no overhanging paper. 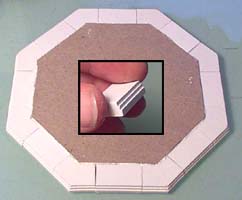 Place the floor on the tower but don't glue it down!
On the last row shown here, don't glue the blocks shown in green!
These will act as spacers for the windows to come next.

For the next row, also do not glue the blocks shown in green.
Glue together 8 arches as shown.
Be sure to get them going the right way.
It's a little hard to see at first, but they should form a peak at the top. 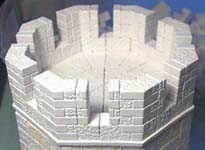 Remove the spacer blocks (in green above) and glue the trim blocks along the sides of the window as shown.
You will notice there's a pattern to the blocks.
I placed the solid brick pattern towards the bottom on all of the blocks, and the half brick towards the top.

Glue on the next row which includes the window arches.
At this point, you may want to flip the whole thing over and sand the top.
The next row will need a fairly flat surface to look good. 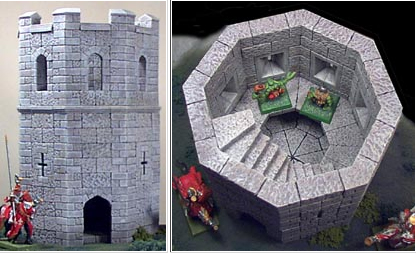 To paint the model follow the instructions on the Painting Instructions page.
Here's a finished photo of the tower.
If you would like to add a spiral staircase (as shown in the second photo), follow the directions below.
You will also need the Prison Tower mold #60 to add the stairway. 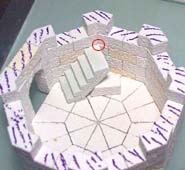 We'll use 5 of the door arch pieces next.
For temporary support, stack a flat trim piece and a regular block.
Then glue the door arches against the side walls as shown.
Do this for the next 5 sides next to the stairs. 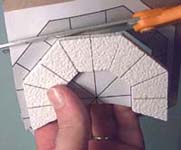 Next we'll make a walkway for the archers (who will want to use the arrow slits).
Print out an extra copy of the floor plan found on the Building Plans page.
Glue the floor plan down to a piece of cereal box.
Then glue 10 floor tiles to it as shown.
After the floor tiles dry, cut around them with scissors to remove the excess cereal box. 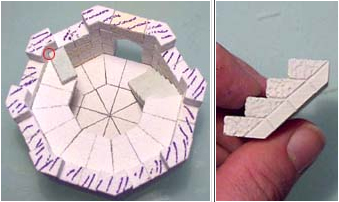 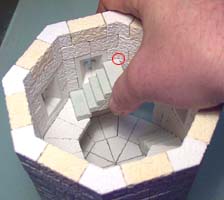 Place the next level of the tower on.
Glue the stair section against the wall only!
If you glue it to the step below, you won't be able to remove the top section later on.
Make sure that the corner of the stair sets into the corner of the tower (circled in red).
Be sure that the top of the stair meets exactly on the block line.
You'll have to hold this here a while until it dries (unless you can stack up enough blocks to support it).

Take the floor tile shown and sand off about 1/4" off the square side.
Fit it under a stair piece from the prison tower.
The outside width of the stair should be the same width as a wall on the octagon tower. 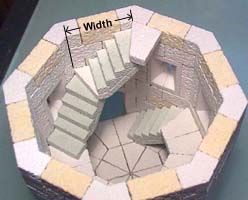 Make the second floor, but leave out the 3 floor tiles as shown.
Set it on the tower and place the rest of the tower on top.
Don't glue any of these pieces on until after you have painted the model! 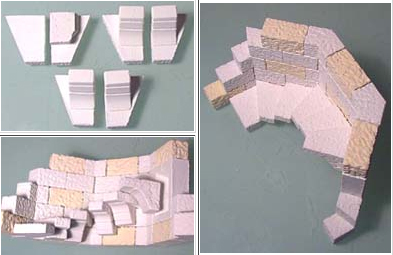 If you don't have a Prison Tower mold, you can still add a staircase by gluing doorway arches onto the bottom of the floor tiles.
Note that the second step has a flat piece under it because it only needs to be off the ground by 1/4".
Lay the tower on its side and glue the steps, slowly rising as it goes around the tower.
Allow the glue to dry well before rotating the tower and gluing more steps on

You will need a stair piece from the Prison Tower mold, with a flat tile placed in the bottom to form a full 5 step piece.
You also need 2 floor tiles from the octagon mold.
Glue them together and glue a doorway arch on the bottom for support. 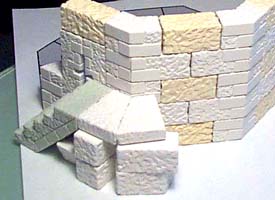 Glue the stair piece along the wall as shown. You will have to put a spare block under the stair to hold it in place temporarily.
The floor tile piece goes next. Once again, temporarily place blocks under the pieces to hold them in place while the glue dries.
Be sure that your steps line up with the block lines on the tower (where the blocks meet at the seams).

The next row of steps goes the same way: Use a 5 step piece along with the floor tile piece to continue around the tower.
When you finish, remove the temporary blocks to see your stairway.